The said business event was the first of its kind, in that it included five Arab Mashriq countries and Greece together under one roof. Its program also included, for the first time, closed networking meetings after each session, bringing together speakers and professional of all interconnected sectors, giving the opportunity to all related parties to exchange news, views and reviews on their sector of interest.

The program of the sessions included speakers from small, medium and high-ranking businesses from the six countries, as well as high-profile keynote speakers. The event started with an introduction by Rashad Mabger, the Secretary General, Arab-Hellenic Chamber of Commerce & Development and then the Guest of Honor, H.E. Nikos Papathanasis, Alternate Minister for Development and Investment of Greece, addressed the audience, highlighting Greece’s investment opportunities and successes in recent years. Then, an agreement was signed between Eng. Mohammed Alamour, Chairman of the Palestinian Businessmen Association and the Arab-Hellenic Chamber’s Vice Chairman, Abdul Azim Weiss, marking the formation of the “Joint Palestinian-Greek Business Council”.

The first session began with a keynote speech by Abdulrazak AL-Zuhairi, Chairman of the Federation of Iraqi Chambers of Commerce in Iraq. Mr. Zuhairi welcomed the attendees, outlined Iraq’s efforts for modernization and established his country’s intent to re-enter the global arena and re-gain its former glory. During Session 1, on the efforts of reconstruction and modernization of infrastructure in the Arab world, the speakers took their turn in presenting their companies’ and their countries’ willingness and capabilities to cooperate with the opposite parties: Qaysar Al-Giburi, representing Abdullah Al-Giburi Group for Contracting & International Agencies, Iraq, Eng. Ban Haddadin, Head of Business Development Department, Arabtech Jardaneh Int’l., Jordan, Eng. Mohamed Haytham Albeik, Founder & Owner, Engineering & Scientific Office, Syria and Antulio Richetta, Director, IBI Group, Greece, with the moderation and coordination of Dr. Saleh Jallad, Publisher of Middle East Economic Survey (MEES) & Board Member of the Arab-Hellenic Chamber, all pointed to the fact that technology and technical infrastructure are available and ready for use in good partnership between interested parties.

Prior to the third session, Anas Joud, General Manager & Board Member, Joud Group of Companies and Representative of the Federation of Syrian Chambers of Commerce and Board Member of the Arab-Hellenic Chamber, delivered his Keynote Address, outlining the resilience of the Syrian people after a long period of instability, and Syria’s willingness to rebuild its economy and exercise its positive role regionally and internationally. Session 3, on agri-food and food security, included the speakers Dr. Sameh Al-Muqdadi, General Manager, Green Charter GC., Foundation for water and environmental consulting, Germany, Atef Idriss, CEO, MEFOSA S.A., Lebanon, Raed Salameh, Founder & General Manager, Hammouda Investment Group and Chairman of the Observation Committee at the Palestinian Businessmen Association, Palestine, Eng. Salman Najib Albahri, Owner & CEO, Albahri Agricultural and Industrial Services, Syria and Konstantinos Biniaris, Managing Director, Partner & Owner, Pot & Pan Food Service S.A., Greece. Under the moderation and coordination of Rashad Mabger, Secretary General of the Arab-Hellenic Chamber, the speakers took the floor to provide the audience with a variety of issues regarding the agri-food sector and an overall view of a field that is so vital to Greece and the Arab world.

In the morning of the second day, Rashad Mabger delivered a brief speech and introduction to the works of the day and then Session 4 started, on the pharmaceutical industry. Mohammed Mohsin Gaeed, General Manager, United Horizon Co., Iraq, Dr. Hanan Sboul, Secretary General of the Jordanian Association of Pharmaceutical Manufacturers (JAPM), Jordan, Ziad Oubari, Vice President & Executive Director, Oubari Pharma, Syria and George Spigos, International Sales Director, OFET Group (Uni-Pharma S.A & Intermed S.A Pharmaceutical Laboratories), Greece, under the moderation and coordination of Dr. Bassim Khoury, CEO, Pharmacare PLC, Palestine, took in turn the floor to address the audience with the generalities and specifics of their business domain, producing an interesting hour and a half for the broader as well as targeted audience.

At the beginning of Session 5, special introductions were delivered by Tawfiq Dabboussi, Vice President, Federation of Chambers of Commerce Industry & Agriculture in Lebanon and President, Chamber of Commerce Industry and Agriculture Tripoli & North Lebanon and George Filiopoulos, CEO, Enterprise Greece, who each, in turn, congratulated the organizers for the important event and then moved on to present the opportunities offered by each of their countries. The speakers who followed delivered brief presentations of their work, inviting the audience and fellow colleagues to cooperate and exchange their experiences: Ali Humaid Al-Makhzoomi, Founder Bil Weekend Co, for Tourism services, Iraq, Majd Omar Abu Arqub, Area Marketing Manager, Jordan Tourism Board, Jordan, Pierre Achkar, President, Lebanese Hotel Association and President, Lebanese Federation for Tourism Industries and Mayor of Brummana City, Lebanon, Mousa E. Jarjoui, CEO, George Garabedian Co. Ltd for Travel & Tourism, Palestine and Talal Khoudeir, CEO, Silk Road Co. for Travel & Tourism and Chairman, Federation of Chambers of Tourism, Syria, under the moderation and coordination of Nicholas Vlachakis, Managing Director, NEOKEM S.A. & Board Member of the Arab-Hellenic Chamber, Greece, all carried the audience along to their country of origin, opening the road to more cooperation between the participating countries.

After a networking lunch, B2B meetings took place between participants and attendees, especially those who did not have the chance to network during the intensive networking meetings after each morning session. On the same evening, upon commencement of the dinner program, the Secretary General, Rashad Mabger, welcomed the attendees and then, the Guest of Honor and Main Speaker of the evening, H.E. Adonis Georgiadis, Minister of Development and Investments of Greece, addressed the banqueters, thanked the Arab-Hellenic Chamber for its initiative and mentioned the opportunities for closer cooperation with the Ministry he leads. The participants then enjoyed a tasty dinner and continued their networking till late evening hours.

All in all, the event was characterized by diversification in terms of speakers and participants, by engaging deliberations and discussions and the feeling that by striving for excellence in partnership between the two parties, Greek and Arab, prosperity is always the end target for all peoples.

The Arab-Hellenic Chamber would like to thank all sponsors, the ministries and organizations which provided their auspices, the coordinating parties and, of course, all of its members and participants in this event for their long-standing support. 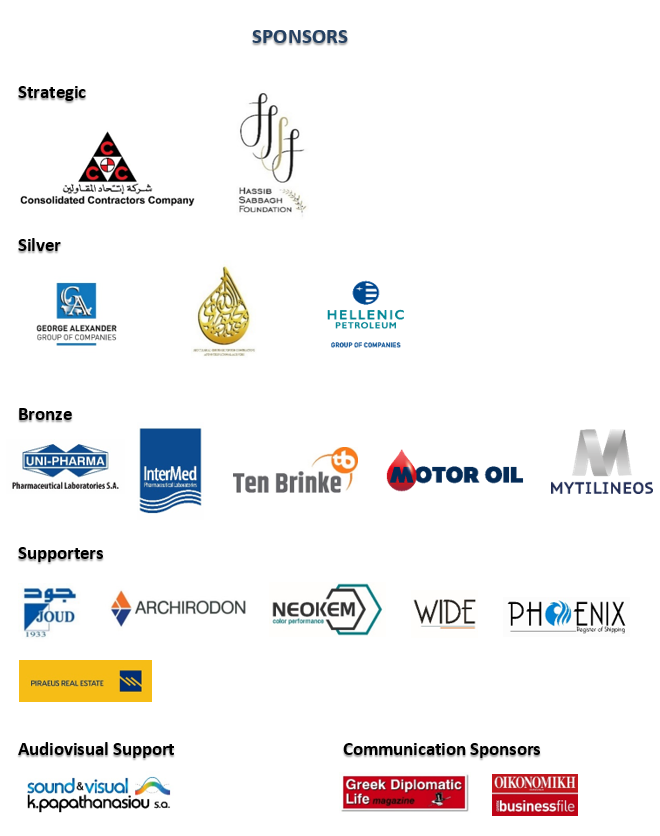