On March 3rd, the Arab – Hellenic Chamber, in cooperation with the Council of Saudi Chambers, organized the Saudi-Greek e-Business Gathering: “Racing to our Common Future”, with the participation of over 90 Saudi owners, CEO’s and company representatives and 100 Greek businessmen and businesswomen in various business domains.

In the opening ceremony, introduced by the Secretary General of the Arab-Hellenic Chamber, Rashad Mabger, the President of the Chamber, Harris Geronikolas, and the President of the Council of Saudi Chambers (CSC), Ajlan A. Ajlan Al-Ajlan, welcomed the participants and outlined in their speeches the prospects of relations between the private sectors in the two countries and hailed the cooperation of the two organizations in the realization of this event. The greetings were followed by a speech by the Vice President of the Arab-Hellenic Chamber and President, Group HR, Consolidated Contractors Company (CCC), Suheil Sabbagh, who called upon the two countries to explore their full potential and elaborated on the Arab companies operating in Greece and their role in enhancing Arab – Greek relations. The Greek Ambassador to KSA, H.E. Alexis Konstantopoulos, then took the floor and touched upon the existing friendly relations between the two countries and their future prospects while, the Saudi Ambassador to Greece, Dr. Saad Alammar, assured the audience of Saudi Arabia’s stand in developing its relations with Greece and welcomed this event and the role of the Arab – Hellenic Chamber in organizing such successful events.

This online event was honored with the participation of three Ministers: H.E. Ahmad bin Aqil Al Khatib, Minister of Tourism, Saudi Arabia, H.E. Harry Theoharis, Minister of Tourism, Greece, and as guest of honor, H.E. Adonis Georgiadis the Minister of Development and Investment of Greece. The three Ministers in their speeches referred to the enormous prospects of Saudi – Greek relations and the bilateral willingness to further these relations in various domains. Emphasis was given on the two countries’ complementing each other in the sectors of tourism and hospitality and the potential of these sectors for the growing number of visitors to Saudi Arabia as well as the know-how and long experience of Greece in these sectors. Minister Georgiadis in his turn, expressed his appreciation to the Arab – Hellenic Chamber in organizing this event that gathered the two sides in one platform and opening channels of communication. His Excellency further stated that the dialogue and communication with the Saudi side is an ongoing process and that his visit with the Greek Prime Minister Kyriakos Mitsotakis to Saudi Arabia last year confirmed the belief and willingness of the two sides to maintain and develop their relations utilizing their full potential.

Then the panel discussion started with the introduction of the two moderators, Nicholas Vlahakis, Managing Director, NEOKEM S.A. and Board Member of the Arab – Hellenic Chamber, and the Secretary General, Rashad Mabger. The first speaker, Eng. Omar A. Bahlaiwa, Founder & President of Optimum Business Consulting Bureau (OBCB) & Vice President of Committee for International Trade (CIT), Council of Saudi Chambers, in his presentation outlined the great potential of Saudi Arabia and its ambitious Vision 2030 for economic development and reforms in the various aspects that will have a positive result in country’s economic diversification and social reforms. The second speaker, Sylvain Hijazi, Business Development Director of ARCHIRODON, in his turn, touched upon the history of his company in KSA, in terms of various projects they have undertaken since 1965, as well as the company’s operations in the Arab world and its future potential to carry on similar projects.

This online business gathering was concluded with the engagement of the participants in networking via video or chat and virtual B2B meetings.

The Arab – Hellenic Chamber, while thanking the President and staff members of the International Department of the Council of Saudi Chambers, for their efforts in the realization of this event, would like to seize this opportunity to express its deepest and utmost appreciation to the three Ministers and two Ambassadors and the Vice President of the Arab – Hellenic Chamber and the two speakers for their valuable role and contribution in the successful outcome of this event. Last, but not least, we would like to express our appreciation to our member companies who came forward and sponsored this event, along with other future online events. 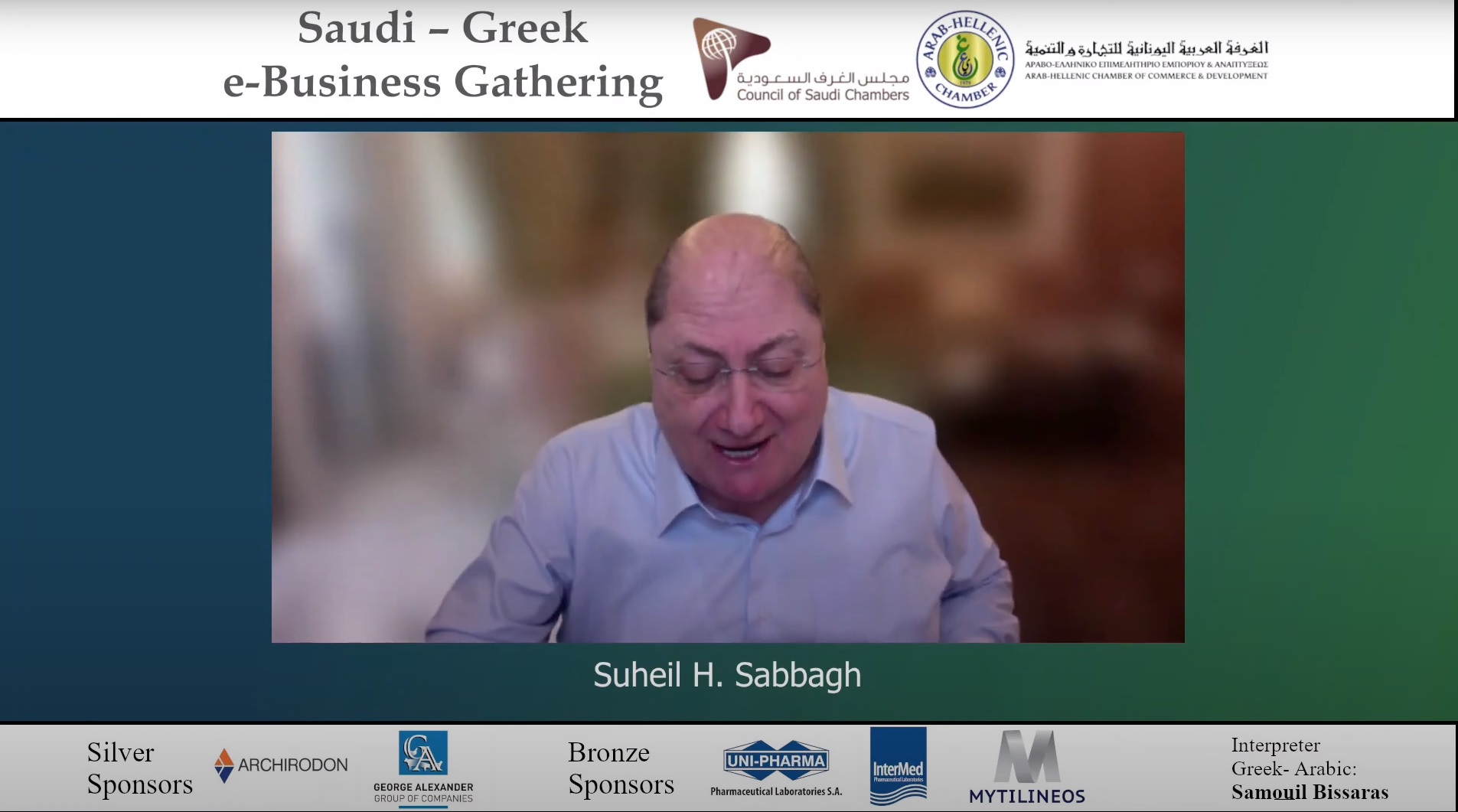 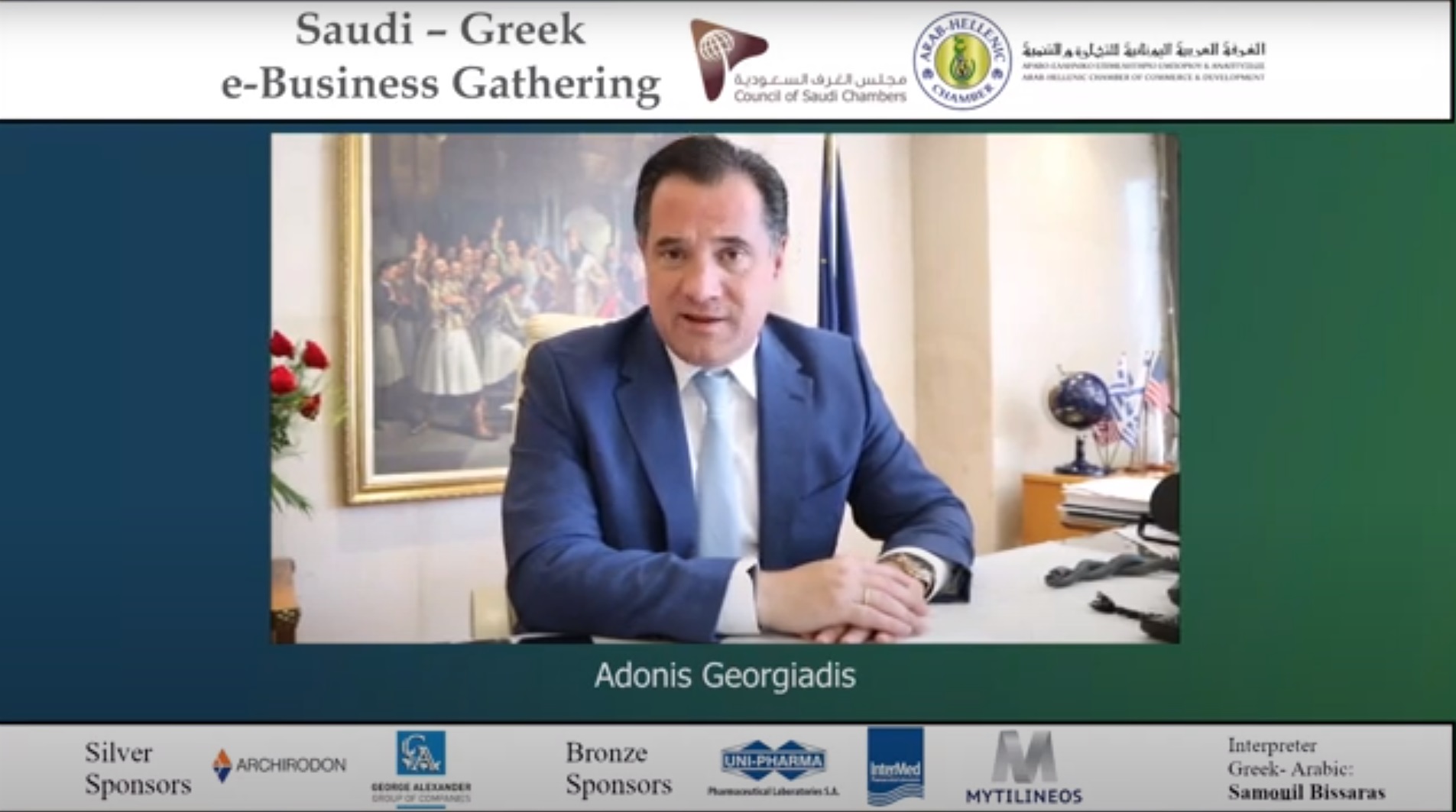 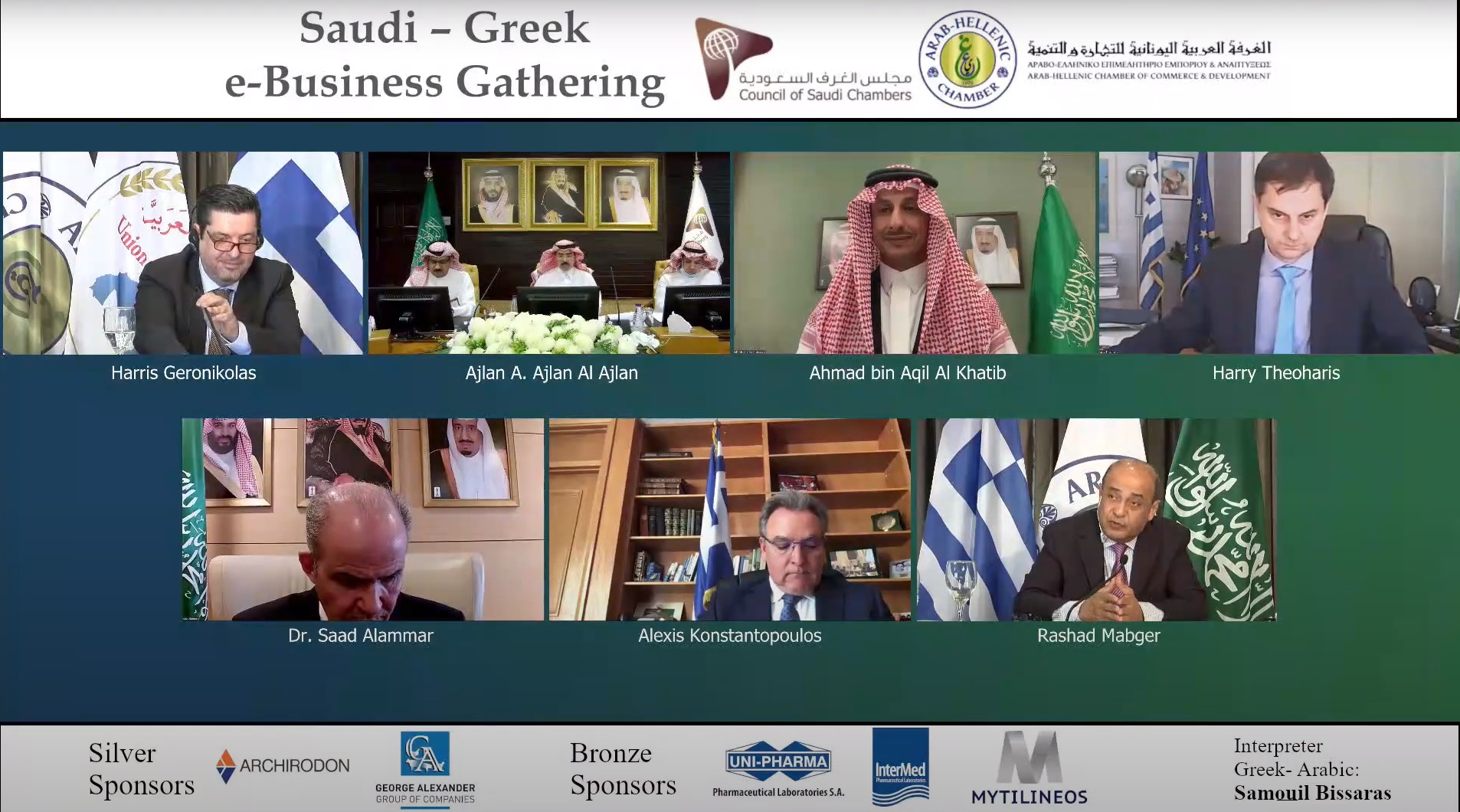 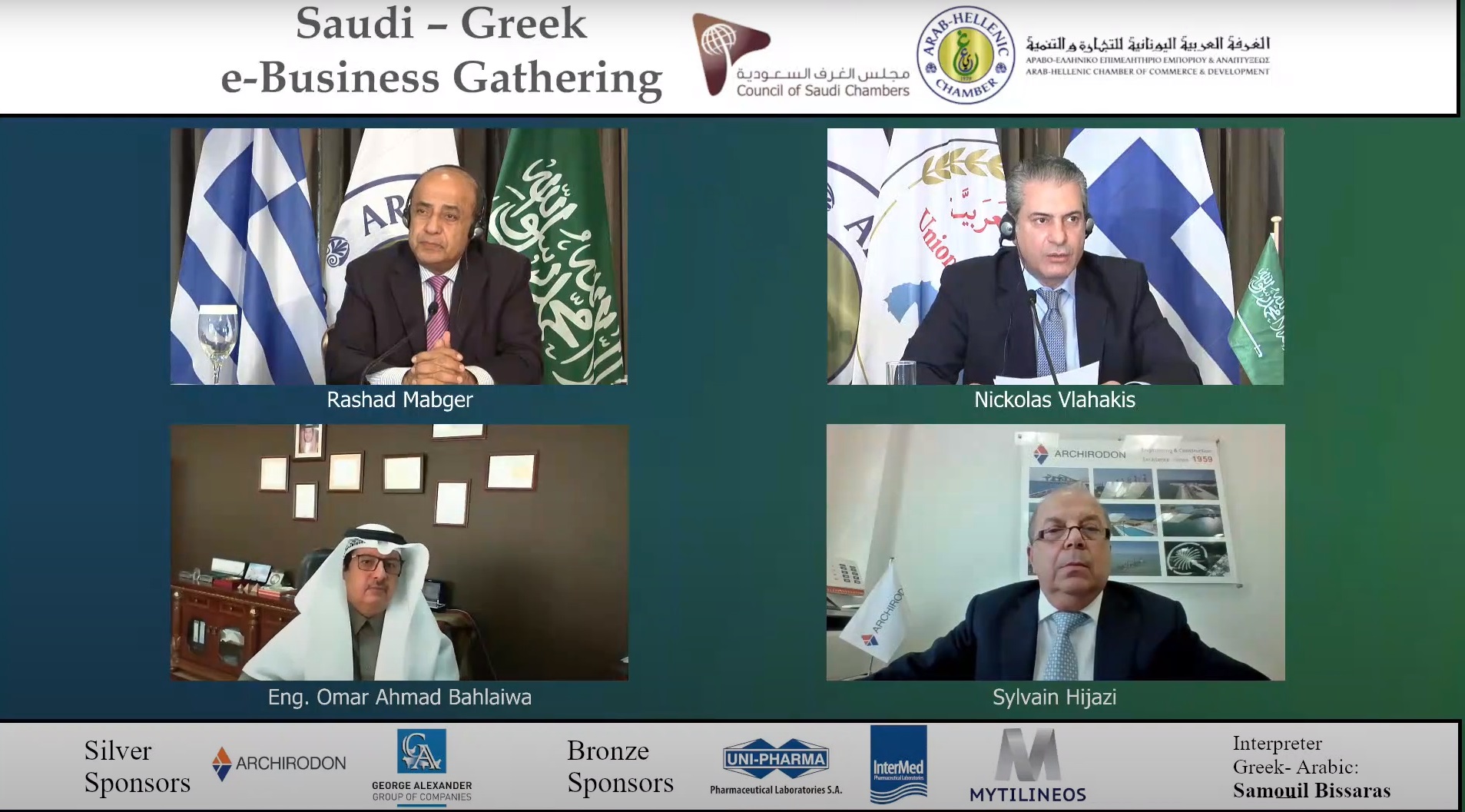